Conímbriga is one of the 10 best Roman ruins outside Rome.

Conímbriga is a walled urban settlement, encircled by a curtain of stone structures approximately 1,500 metres (4,900 ft) long. Entrance to the settlement is made from vaulted structures consisting of two doors (one on hinges), and at one time was defended by two towers. The walls are paralleled by two passages, channelled to excavations, in order to remove water infiltration from the walls. The urban settlement consists of various structures such as a forum, basilica and commercial shops, thermal spas, aqueducts, insulae, homes of various heights (including interior patios) and domus (such as the Casa dos Repuxos and Casa de Cantaber), in addition to paleo-Christian basilica.

Conimbriga is one of the few Roman cities which retains the outer wall, approximately triangular plant. The north-south stretch of walls divides the city into two zones. Particularly notable for the plant and the richness of the mosaics that pave is the major urban villa with central peristyle, the northern route. When working with the South wall was discovered a large building whose purpose would be public spa, with its characteristic divisions.

A visitors’ centre (which includes restaurant/café and gift-shop) was constructed to display objects found by archaeologists during their excavations, including coins, surgical tools, utensils and ceramics. 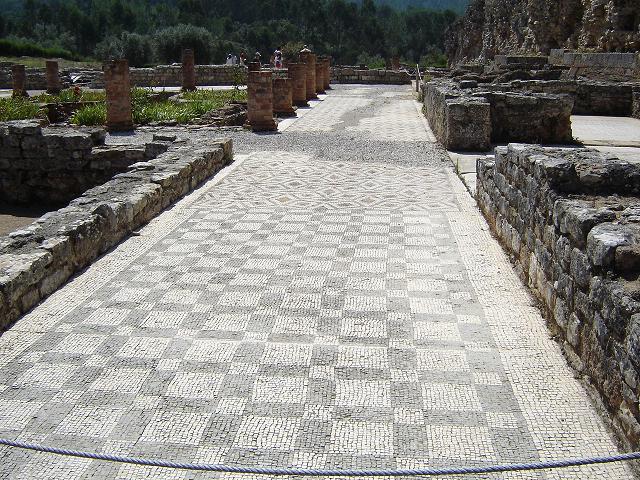 During the reign of King Manuel (1519), the king ordered the inscriptions on the facade of the Church of Condeixa-a-Nova.

In the 18th century, Conímbriga was first referred to in parochial documents, resulting in the 1869 visit by Hubner to the site. In 1873, the Instituto de Coimbra (Coimbra Institute) was created, in addition to the formation of a museum dedicated to archaeology, instigating the first formal excavations at Conímbriga in 1873. Mosaics were removed from the uncovered homes and the first excavations were made in 1899, resulting in the plan for the oppidum.

In 1911, the Coimbra Institute ceded its collection to the Museum Machado de Castro, resulting in the beginnings of the studies by Augusto Filipe Simões and António Augusto Gonçalves.

On the occasion of the 11th International Congress on Archaeology and Pre-History (1930) in Portugal, the state acquired the first lands and official excavations on the site.[1]At the time of this congress the eastern gates to the city were unobstructed. The following year the DGEMN started the work of reconstructing and consolidating the ruins, which were continued in 1955.

In 1956, there were archaeological studies of Oppidum Romano, by the Serviços dos Monumentos Nacionais (National Monument Service). New excavations occurred in 1964.

In 1962, the Museu Monográfico de Conímbriga (Conímbriga Monographic Museum) was inaugurated. It was followed in 1964 by the collaboration between this museum and the archaeological mission from the University of Bordeaux: under the direction of J. Bairrão Oleiro, Robert Étienne and Jorge de Alarcão, the centre of the Roman city was unearthed.

In 1970, the work with the mosaics was consolidated, at a time when the monograph museum was expanded (with a basement, installations for a guard and interior shelter).[1]But, throughout the transition to Portuguese democracy and beyond, the team at Conímbriga attempted to consolidate and maintain the site.[1] The early work continued into 1974, with the consolidation, restoration and expansion of the museum and 1975, with the prospecting into other zones, the paving of walkways, landscaping and solutions to drainage issues. In 1976, the gazebo and interior of the older Monographic Museum was repaired.[1] These repairs continued into 1977, with expansion of the museum, restoration of the facades, the old portico and the colonnade was transformed into an internal gallery, the arrangement of the principal atrium and creating a gutters to alleviate pedestrian walkways.[1] The following year began the construction of a ticket booth in cement and glass, while in 1979 an electrical transformer and litter incineration unit was installed. The installation of electrical devices, illumination and climate control units in the museum only occurred between 1981 and 1982.[1] In 1986 a new awning was installed to cover the Casa dos Repuxos.

The first permanent public exposition was opened in April 1985.

During the 1990s, there were projects to remodel the museum and upgrade the displays and various installations to support visitors, under the direction of Cruz Alarcão, Arquitectos Lda.[1] They were re-contracted between 2004-2005 to improve the site, including the reconstruction of the Augustian forum and southern thermal spas, construction of a small structure for spectacles (consisting of a roadway, stage and bunks molded to the terrain), alongside the aqueduct.[1] On 9 August 1991, the museum became part of the Instituto Português de Museus (Portuguese Institute for Museums), leading to the 1 June 1992 transfer to the Instituto Português do Património Arquitetónico (IPPAR), and then on 29 March 2007, the Instituto dos Museus e Conservação (Institute for Museums and Conservation).

The excavation site and visitors’ centre is located on the outskirts of the rural community of Condeixa-a-Nova, based on a plateau-shaped triangular spur over two deep depressions (one occupied by the Ribeira dos Mouros).

Although Conimbriga was not the largest Roman city in Portugal, it is the best preserved, with archaeologists estimating that only 10 percent of the city has been excavated.

The urbanized civitas includes integrated structures starting from the Iron Age and extending to the 5th century. There were specifically three phases of spatial organization: in the 1st century BC, under the reign of Augustus, a late republican forum (that included crypto-portico, basilica, curia and commercial shops), thermal baths, a aqueduct and the first residential pre-Roman architectural structures; a 1st century AD group, established under Flavius, that included a reconstructed imperial forum, Vitruvian baths and revised urban plan; and a 3rd century, settlement that fell within revised walls.

The civil/residential buildings included numerous examples of remodeled and reused structures dating from the first century BC. Most of these homes were insulae (houses with more than one floor), with open patio/courtyards and domus with peristyle (such as the Casa dos Repuxos and Casa de Cantaber). Most of the private/civil architecture and public buildings included abundant decorative materials, including mosaics, sculptures and painted murals.

Of the Suebic occupation, there is a paleo-Christian basilica (5th-6th century), which was a reused and transformed domus. The robust, rustic 1,500 metres (4,900 ft) walls imply an urgency in its construction.[3] Its was built using large, carved, irregular blocks, with most coming from other constructions. The height of the walls vary from 5 metres (16 ft) to 6.5 metres (21 ft), suggesting the significance of its military feasibility.

There are three distinct baths within the walls: the Great Southern Baths, the Baths of the Wall, and the Baths of the Aqueduct. The network of stone heating ducts under the (now-missing) floors are the most distinct structures in the Roman baths.

The amphitheatre, dating from the end of the Julio-Claudian dynasty, takes advantage of a natural depression that surrounded the city to the north. The first was identified in 1993 by Virgílio H. Correia, and excavations began in 2012-2013. Part of the amphitheatre was located below local homes in Condeixa-a-Nova, consisting of three entranceways to the Roman structure.  The 5000-capacity monument was 90 by 60 by 20 metres (295 × 197 × 66 ft), and 4 metres (13 ft) underground, with some rural homes built using part of the structure.

The Luso-French mission (1965-1968) unearthed public structures of great dimensions, whose architecture was reconstructed. This included two phases, where the first structures can not be reconstructed with certainty. These Flavian monuments coincide with the location of some important elements, such as the central square.