The reconquest of the territory was attained in 1064 by King Ferdinand I of León and Castile, who appointed Dom Sisnando Davides to reorganize the economy and administer the lands encircling the city. The County of Portucale and the County of Coimbra were later integrated into one dominion under the stewardship of Henry of Burgandy byAlfonso VI of León and Castile in 1096, when Henry married Alfonso’s illegitimate daughter Theresa. Henry expanded the frontiers of the County, confronting the Moorish forces, and upon his death (in 1112), Theresa, Countess of Portucale and Coimbra, unified her possessions. Their son, Afonso Henriques, who would take up residence in the ancient seat of the Christian County of Coimbra, sent expeditions to the south and west, consolidating a network of castles that included Leiria, Soure, Rabaçal, Alvorge and Ansião. 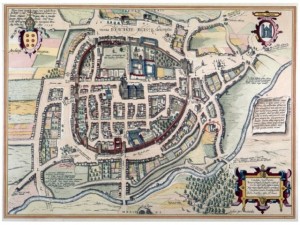 During the 12th century, Afonso Henriques administered an area of fertile lands with river access and protected by a fortified city, whose population exceeded 6000 inhabitants, including magnates, knights and high clergy. The young Infante encouraged the construction of his seat, funding the Santa Cruz Monastery (the most important Portuguesemonastic institution at the time, founded in 1131 by Theotonius), promoted the construction of the Old Cathedral, reconstructed the original Roman bridge in 1132, recuperated fountains, kilns, roads and stone pavements, as well as renovating the walls of the old city. In order to confirm and reinforce the power of the concelho (municipality) he conceded a formal foral (charter) in 1179. 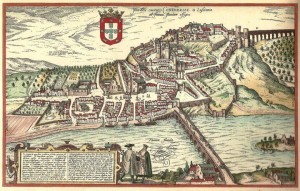 Already in the Middle Ages, Coimbra was divided into an upper city (Cidade Alta or Almedina), where the aristocracy and the clergy lived, and the merchant, artisan and labour centres in the lower city, outside the Wall (Arrabalde or Cidade Baixa) by the Mondego River, in addition to the old and new Jewish quarters. The city was encircled by a fortified wall, of which some remnants are still visible like the Almedina Gate (Porta da Almedina). Meanwhile, on the periphery, the municipality began to grow in various agglomerations, notably around the monasteries and convents that developed in Celas, Santa Clara, Santo António dos Olivais. The most important work in Gothic style in the city is the Monastery of Santa Clara-a-Velha, founded on the left side of the river Mondego by Queen Elizabeth of Portugal in the first half of the 14th century. It stood too close to the river, and frequent floods forced the nuns to abandon it in the 17th century, when the Monastery of Santa Clara-a-Nova was built uphill. The Queen’s magnificent Gothic tomb was also transferred to the new convent. The ruins of the old convent were excavated in the 2000s, and can be seen today in the left bank of the river.