The Church of Santiago is located in the Commerce Square in St. Bartholomew parish, city, county and district of Coimbra, in Portugal. Built between the late twelfth century and early thirteenth century, it is one of the finest Romanesque city. 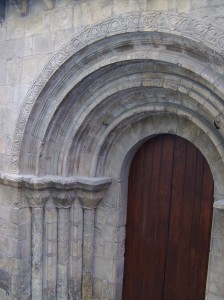 s works of the temple were initiated before the year 957, as evidenced by a document where this is donated to Lorvão Monastery. It was rebuilt in the last decades of the twelfth century, in an unknown date in the reign of Sancho I of Portugal. Its ordination occurred in 1206, but it is believed that the articles are still be extended for several years. At least two constructive campaigns in the Romanesque style, were made at that time.

Outside the church stand out from the major portals and south side, valuable works to understand the Romanesque Coimbra. The main portal of four archivolts, it seems later and with the participation of high artistry artists together with other less talent. Here the capitals contains a number of reasons, both vegetal and animal, some derived from the Old Cathedral of Coimbra, as the reason of facing birds. The columns of the main entrance are also profusely decorated with geometric reliefs shaped spiral and plant motifs. The elegant south portal probably belongs to the late twelfth century, consisting of several archivolts without decoration, surrounded by a frame-shaped vine, capitals and columns with plant motifs.

Church of Santiago: the south portal detail.
The interior of the church has three naves and three chapels at the head. In the fifteenth century was added, north side of the church one quadrangular chapel, with a portal in Gothic style with an interesting alfiz decorated.

Although it has undergone several changes over the centuries, the most radical intervention took place in the sixteenth century when it was built a second church on the early church, to serve as the city’s Mercy Church. This addition, built in the 1540s, was removed in the restoration work of the first half of the twentieth century.

An important mutilation of the church occurred in 1861, when the enlargement of the current street Visconde da Luz. In this work was lost much of southern and main chapel absidíolo.