The Santa Cruz Monastery, (English: Monastery of the Holy Cross, Portuguese: Mosteiro de Santa Cruz), best known as Igreja (Church) de Santa Cruz is a National Monument in Coimbra, Portugal. Because the first two kings of Portugal are buried in the church it was granted the status of National Pantheon. Founded in 1131 outside the protecting walls of Coimbra, the Santa Cruz Monastery was the most important monastic house during the early days of the Portuguese monarchy. St. Theotonius founded this community of canons regular and served as their first prior. The monastery and church were erected between 1132 and 1223. The monastery was granted numerous papalprivileges and royal grants, which allowed the accumulation of considerable wealth, at the same time as it consolidated its position on the politico-institutional and cultural scene. Its school, with its vast library, was highly respected in medieval times and was a meeting point for the intellectual and power elites. Its scriptorium was used for the consolidation of royal power by King Afonso Henriques, thus it was not considered strange that he decided to be buried there. 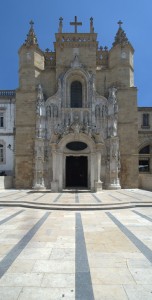 Nothing remains of the early Romanesque monastery. It is known that it had only one nave and a high tower in the façade, as typical of the Augustinian-Romanesque constructions, but none of those elements subsisted. In the first half of the 16th century, the Monastery was completely renovated by King Manuel’s order, this monarch having assumed the Monastery tutelage.

The whole monastic complex, the church and the tombs of King Afonso Henriques and of his successor, King Sancho I, were rearranged and transferred to the main-chapel in 1530, where they still lie in a sculptural work by Nicolau Chanterene. The architect Diogo Boitacwas responsible for the layout of the Manueline church and the Chapter house with its basket-handled and ribbed ceilings. Marco Pires gave continuity to the work, with the completion of the church, the Capela de São Miguel (St. Michael’s Chapel) and the Claustro do Silêncio (Cloister of Silence). The main portal, built between 1522 and 1525 under Chanterene, is the most emblematic piece of the whole monastic ensemble, harmonising the artistic elements of the Manueline with other features from Renaissance inspiration.

Through the whole 16th century, worked at Santa Cruz de Coimbra the most respected architects, sculptors and painters, such as Diogo de Castilho, Machim and Jean of Rouen, Cristóvão de Figueiredo and Vasco Fernandes besides the already mentioned Chanterene, Boytac and Diogo Pires the Younger. The sacristy dates back to the 17th century and keeps some notable 16th century canvases.

Saint Anthony of Lisbon was a member of the community of canons regular, and after his ordination, he was placed in charge of hospitality for the monastery. It was in this capacity that he welcomed the remains of the Franciscan protomartyrs, whose remains were being transported back to Assisi, after their deaths in Morocco. This led to his decision to leave the security and ease of the life of a canon for that of the newly founded Franciscans.