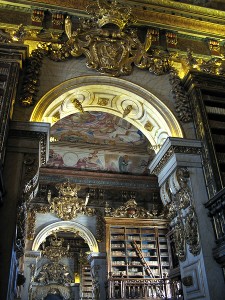 Its construction began in 1717, outside the primitive Islamic perimeter of the former prison of the Royal Palace, in order to house the university library of Coimbra, and was completed in 1728.

Although it was built following the royal draft reform of university studies (result of the spread of Enlightenment currents in Portugal), the Baroque Library is recognized as one of the most original and spectacular Baroque European libraries.

The foreman was João Carvalho Ferreira. The painted decoration was only carried out a few years later, already on the eve of Pombal’s Reform: fresh ceilings and cornices were executed by António Simões Ribeiro, painter, and Vicente Nunes, gilder. The big picture of the King is attributed to Italian Domenico Duprà and painting and gilding of the shelves was made by Manuel da Silva. The furniture in exotic Brazilian and oriental woods, was executed by the carver Francesco Gualdini. 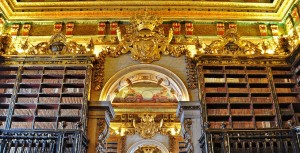 Over the entrance door, the library exhibits the national coat of arms. Inside, there are three great rooms divided by decorated arches, bearing the same style as the portal and entirely executed by Portuguese artists. The walls are covered by two storied shelves, in gilded or painted exotic woods; the painted ceilings, by the Lisbon artists Simões Ribeiro and Vicente Nunes, blend harmoniously with the rest of the decoration. The library contains about 250 thousand volumes, namely works of medicine, geography, history, humanistic studies, science, civil and canon law, philosophy and theology. It is a National Monument and has a priceless historical value being one of the main tourist attractions among the older monuments belonging to the university.

Outwardly resembles a vast cobblestone which notes the noble portal, baroque style, topped by a large national monarch time shield that had it built: John V.

Inside consists of three rooms communicating with each other through identical arches to the portal and fully coated shelves, decorated the Chinese motifs (the first room in contrast gold on green background, on Monday, gold on red and gold over the last black background).

All its architecture involves a portrait of King John V who, placed on the wall of the top of the building, in the last room, works as “vanishing point” of the library of the University of Coimbra, also called in other times Library of the House. The central nave of the Baroque makes its structure resembles a chapel, in which the portrait of King John V takes the place of the altar. The golden screen bezel mimics a curtain that opens to view, a “magnificent allegorical composition,” the king.

The Joanina brings together about 70,000 volumes, most of which in the main floor. Here are preserved the main Ancient Book of funds (up to 1800 documents) University.

Its about 1250 m² useful current were obtained with the arrangement of two levels of basement for storage and work rooms.